Lania: Community of arts and many nationalities 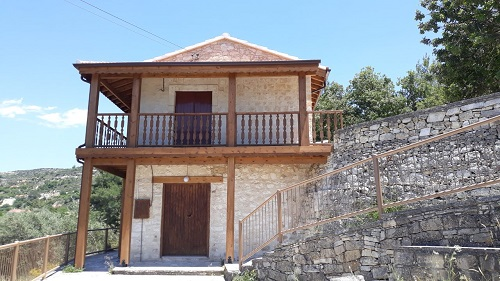 This summer, the "Artists' Workshop" will open in Lania, the community of creators (as it is characterized), the President of the Community Council, Michalis Papaelisseou, told "Entrepreneurial Limassol", adding that the works on the outside area have been completed and the equipment is in the final stage. The work was carried out with the support of the Deputy Ministry of Tourism and the Commissioner for the Development of Mountain Communities.  The workshop will have the infrastructure to accommodate four artists simultaneously who will live in the area, work and present their work.  Each artist will also donate a project to the Community.
According to Mr. Papaelisseou, the community is already in contact with a group of artists who expressed readiness by the end of June (if the project is completed), to go there and start work.
In Lania there are also 4 artistic workshops.   One of them was recently added, with two artists engaged in ceramics and handicrafts. The most famous, internationally acclaimed creator who lived and worked in Lania, until 2003 when he passed away, was John Corbidge.
Another characteristic of Lania is that citizens from a total of 11 nationalities live there, living together in harmony and actively participating in its events. Mr. Papaelisseou pointed out that the population of the community has increased sharply in recent years. At the last census the inhabitants were 230, while at the moment they number 420, making Lania a village that is not plagued by urbanization. A few weeks ago, a physiotherapy center has been put in operation in the community, with a GESY physiotherapist working on Tuesdays and Fridays, and the attendance at it is very satisfactory.
In Lania there are two taverns that operate on a daily basis (winter-summer) and five accommodations for short vacations. The abandoned due to wear and tear building of the police station has been granted to the community, in order to renovate and reopen it and according to the President of the Community in June, tenders will be announced for the project, which will cost half a million,  and with its reopening, reinforcement of the staff will be requested.