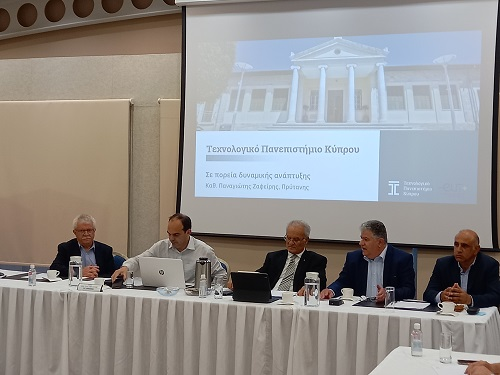 The firm support of the Limassol Chamber of Commerce and Industry (LCCI) in the development course of the Cyprus University of Technology (CUT) was repeated by the Chamber President Andreas Tsouloftas, during a recent meeting of CUT’s leading team with the plenary of the Chamber Board of Directors.
The new University President Christos Chomatas, the Vice President Iakovos Papaiakovou, the Rector Panagiotis Zafiris and the Director Costas Hoppas were hosted at a meeting of the LCCI Board during which a broad exchange of views took place, on almost all issues related to the daily life and the needs of the University, mainly in terms of the lack of space for the further development of the educational institution. At this level, both sides expressed their intense dissatisfaction for the unacceptable (and prolonged) obstruction observed by the state regarding the concession to the University of lands on Leontiou Street, which have for years been intended to be CUT’s B’ Pole of development.
Issues of bilateral cooperation were also discussed, including through the coordination of actions towards the alignment of University programs of study with the needs of the labour market and the employment of students and graduates either for internship purposes or as permanent staff. The two sides decided to continue the periodic meetings between them, aiming not only at exchanging information but also at taking joint actions and initiatives where necessary.