Agridia Observatory: Pole of attraction, before it even becomes operational 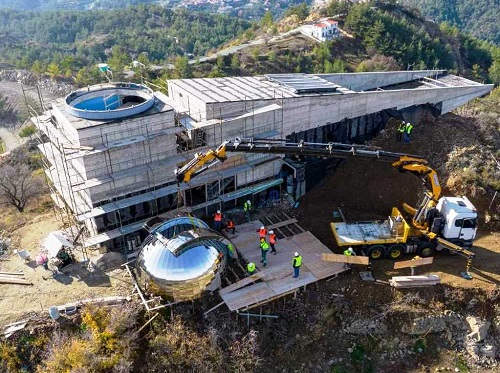 Construction work on the state-of-the-art Troodos observatory in Agridia is still in progress, but visitors are already flocking there after the installation of the dome on the building, as the Agridia community head Andreas Evgeniou told "Entrepreneurial Limassol", expressing the belief that the project will increase the number of visitors in the wider area of Troodos, benefitting the surrounding villages that have hotels and restaurants.
Mr. Evgeniou said the construction of the Observatory main building has been completed and still pending are the placement of the external cladding, the sliding roof for the sun telescope and the configuration of the spaces inside. He expressed the hope that by Easter time, the project would be completed and formally delivered. The Observatory is expected to attract astronomers, scholars, researchers, and astronomy enthusiasts from all over the world, while it will be a pole of attraction for all schools in Cyprus.
In conjunction with the Cyprus Planetarium outside the Tamasos and Orinis Metropolis, it is expected to place Cyprus on the world map of the best destinations for astrotourism, for which a program is already running by the Research and Innovation Foundation. The wider area will derive benefits, attracting alternative agro-tourism and astro-tourism, while new jobs will be created for the Observatory, and related services, such as the reception of schools, the operation of a cafeteria-restaurant, and a souvenir shop.
Meanwhile, as Mr. Evgeniou told us, efforts are being made to upgrade the old Primary School, which has long been used by the Municipality of Latsia as a camping site in the summer, so that it can now function daily as a place for catering and rest within the community. Agridia has an excursion area, which has been upgraded in recent years and can accommodate quite a few people, as well as two facilities for accommodation, which are rented through the Airbnb platform. The community is included in the South Pitsilia complex being created, but Andreas Evgeniou believes that more beneficial for the region would be the creation of a Troodos Municipality. He expressed the hope that this could become possible at some point, but pointed out that in order for it to become a reality, localist attitudes will have to be put aside.

The Limassol Historical Centre is in the spotlight

The oldest hotel of the island, is located in Limassol

A medieval bridge, an archaeological treasure of the district

Cooperation between Cyprus Institute of Neurology and Genetics & CUT

CUT awarded for the good practices on gender equality at workplace