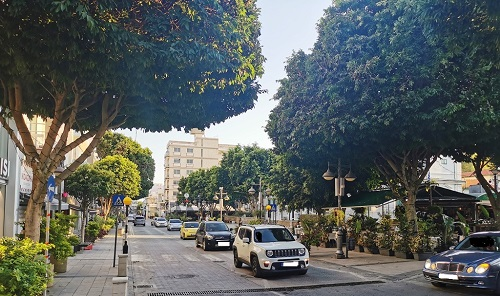 The Limassol Municipality intends to announce five measures to ease traffic in the center of Limassol before the end of the year, which include turning Anexartisias into a one-way street, as well as the setting of a speed limit of up to 30 kilometers, south of Gladstone Street. As Mayor Nicos Nicolaides explained to "Entrepreneurial Limassol", the 30 kilometer measure will create the conditions for the safe use of bicycles as well as "micromobility", since the measures include the licensing of electric scooters, which can only be used on cycle paths.
The Municipality is in the process the 30 km speed limit east and west of the center and as the Mayor told us, and, where possible, some exits will be left for bicycles and scooters, so that they can reach Makarios Avenue. At the same time, the 30-kilometer zone will be declared free of carbon dioxide emissions for public buses, given Limassol Bus Company’s purchase of 35 electric buses, which will run in the center. With reference to turning Anexartisias into one-way, Mr. Nicolaides pointed out that the permitted direction will be from north to south, as per the shopkeepers’ wish, and that it will be a transitional stage until access to the city's shopping center is ensured in satisfactory ways, in which case it will be pedestrianized.
The road is currently being mapped, and the plan for the single carriageway will go through the Municipal Council before being put out for public consultation. The idea of park-and-ride stations around the perimeter of the center will also be strengthened, with the use, in addition to the Epaminondas block already used for this purpose, of a block in Feizi Pasha, for which for which expropriation procedures are in progress, as well as the Enaerios parking area. This will ensure transfer areas, north, east and west of the center. The local authority will also encourage the use of the bus along the seafront to access the center from east and west.