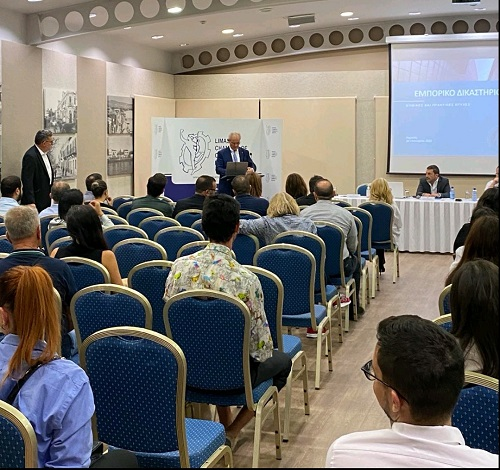 Μore than 100 people, entrepreneurs, lawyers and others, attended a presentation, at the premises of the Limassol Chamber of Commerce & Industry, on the Commercial Court and Maritime Court, which are currently under establishment. The event, with presentations by the President of the Limassol Bar Association Haris Dimitriou and lawyer Antonis Alexopoulos, was jointly organized by the Chamber and the Limassol Bar Association.
In an introductory greeting that preceded the presentations of Mr. Dimitriou and Mr. Alexopoulos, the Chamber President, Andreas Tsouloftas, referred to the importance of the creation of the new judicial bodies, pointing out Cyprus lags seriously behind in terms of the speed of administration of justice, especially when it comes commercial cases . He observed that as a natural consequence, at the end of the day justice is not delivered, as many Chambers members know all too well, having had to go for painful out-of-court settlements, instead of waiting many years for their cases to be handled by the courts.
Regarding the Commercial Court under establishment, which will only deal with cases of large monetary value (over €2 million), Mr. Tsouloftas noted that this is at least a good start in the right direction. And the existence of this specific body will be helpful for the image of our country abroad, as a business center and investment destination. He also emphasized the urgent need for the Court to operate in Limassol as well, which is the business center par excellence of Cyprus and the headquarters of a significant number of international companies.
After the detailed presentations, on the Commercial Court by Mr. Dimitriou and on the Maritime Court by Mr. Alexopoulos, there followed discussion with the audience, during which answers were given to a number of questions.