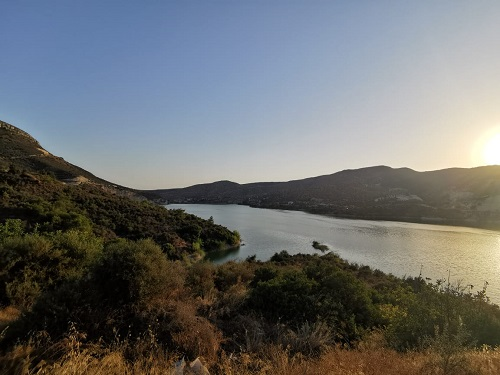 The communities of Finikaria and Akrounta are proceeding with a plan for the creation of a pedestrian and bicycle path, around the Yermasoyia dam, with the assistance of the Limassol Tourism Development Company and the Yermasoyia Municipality. Speaking to ‘’Entrepreneurial Limassol’’, Finikaria Community Council head Marios Rotis said the two communities expect to raise funding of up to €65,000 each from the scheme to redevelop rural areas, through the creation of authentic experiences, for the enrichment and upgrading of the tourist product.
The issue was discussed with Deputy Tourism Minister Savvas Perdios on July 29 when he visited the two communities accompanied by the president of Limassol Tourism Development Company Tony Antoniou and its Director, Maria Stylianou. The design of the project, which will be in line with the environment, will be entrusted to an architectural firm and will include various infrastructures.  The goal is to submit it to the Deputy Ministry in 2023.
Regarding Finikaria, Marios Rotis told us that the number of new couples has increased and that the inhabitants now number around 550. He said young couples were apparently attracted by the beautiful environment and the safety in the community, which at the same time is very close to the city. The central point of Finikaria is the community park that also functions as a restaurant and café. Mr. Rotis pointed out that nature trails overlooking the dam and the picnic area created by the community, attract many visitors, but there are also troublemakers that are responsible for pollution, including noise pollution.  A serious problem for Finikaria is the existence of only one entry/exit to and from Limassol, through the dam.
Mr. Rotis said that one can also head to Armenochori and Pareklisia and that it will be a relief when the Armenochori dirt road finally becomes a paved road.  The community also wishes to connect with Mouttayaka with a road, but, according to Mr. Rotis there are difficulties, because is a large area of Turkish Cypriot land. Community expectations include the upgrading of the urban planning zones, to help people benefit from land they own.