The sewerage of the Kourion complex at a dead end, due to the stalling of government services 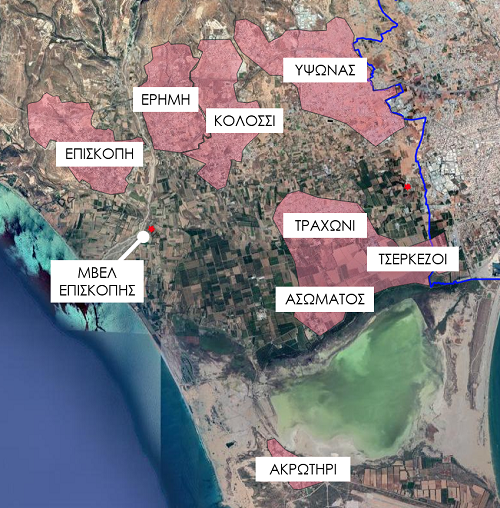 The SBLA has postponed for a later stage the decision to conclude an Advisory Services Contract for the major project of its extension to the eight Municipalities and Communities of the Kourion Complex (Ypsonas, Kolossi, Erimi, Episkopi, Akrotiri, Trachoni, Asomatos and Tzerkez), due to the non-response of government departments, to a number of questions raised. The issue was addressed at a recent Board meeting of the Council, during which it was decided to request with a firm letter to the government Departments, clarification of the pending issues, pointing out that otherwise will not proceed with the implementation of the project.
The SBLA asks for clarification of the grant of the Project to the Municipality of Ypsonas, given an earlier decision of the Ministry for a state subsidy of 80%, while with this year's decision, the project will have to a large extent to be self-financed, with the imposition of increased fees. The Board also inquires what will happen with the imposition of fees on the communities that are included together with Ypsonas, in the new Municipality of West Limassol. It is pointed out that the imposition of fees on industrial and commercial premises, as determined by the Ministers Board, is not fair and will provoke reactions from the business community.
Clarifications are also requested on how the costs of building and operating the third Wastewater Treatment Plant in Episkopi will be shared. It should be noted that the SBLA has not yet officially received from the government the geographical boundaries to which it will be extended, without which neither a Master Plan nor a Feasibility Study of the Project can be prepared.  In addition, no government decision has been made whether the Third Industrial Area will be included in the sewerage system and who will bear the cost.
The Council is also awaiting a response on the possibility of securing loans with government guarantees (which are abolished by the reform), the timing of payment and the calculation of the government contribution. Finally, it raises the issue of numerical reinforcement of its staff, given that it is already carrying out infrastructure projects of €100 million and cannot undertake another huge project, in the order of €120 million.