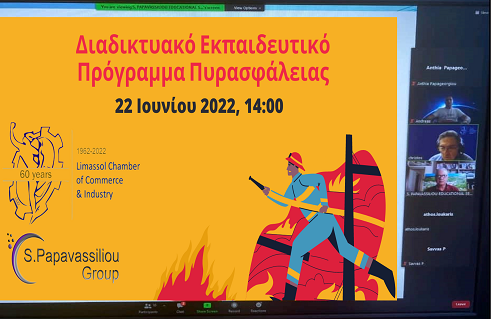 An online seminar on fire safety in businesses was recently organized by the Limassol Chamber of Commerce and Industry. The event, which took place in collaboration with the Chamber member company S. Papavassiliou Consulting, deliberately coincided with the arrival of the summer season, when the risk of fires is invariably heightened. Several LCCI members joined the webinar, which was presented by one of Cyprus' leading experts in fire safety matters, George Makariou. Mr. Makariou set out a detailed outline of the measures and actions that should be meticulously adopted in workplaces to avoid, to the greatest extent possible, unwanted incidents.
The aforementioned webinar was essentially the first stage of a fully-fledged seminar on the same topic, to be held in the fall, again with Mr. Makariou as the presenter, which will also include practical training. The full program of the upcoming seminar and further details will be announced in early September.