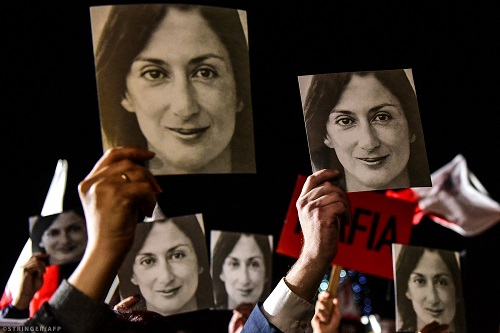 By Thea Pieridou
Press Officer of the European Parliament Office in Cyprus
The Daphne Caruana Galizia Journalism Prize was established on 16 October 2020 by the European Parliament, in honor of Maltese investigative journalist and blogger Daphne Caruana Galizia, known for her fight against corruption who was murdered in 2017. In her professional career, she had revealed extensive information on issues related to corruption, money laundering, organized crime, the sale of "golden passports" to third-country nationals and the involvement of the Maltese government in the "Panama Papers" scandal. Having been repeatedly harassed and threatened, the journalist was murdered on October 16, 2017, when a bomb planted in her car exploded.
The prize is awarded annually to works of well-documented journalism that promote or defend the fundamental principles and values ​​of the European Union, such as human dignity, freedom, democracy, equality, the rule of law and human rights. The award and the prize money (€20.000) that accompanies it are another example of the important support that the European Parliament provides to investigative journalism and the importance it attaches to freedom of the press. In recent years, the European Parliament has warned of attempts to undermine pluralism in the EU and outside it. MEPs have condemned attacks on journalists, especially those coming from politicians, calling on the European Commission to submit a legislative proposal against abusive lawsuits. It is worth noting that on 11 November 2021, the European Parliament approved a report by co-rapporteurs Roberta Metsola (EPP, Malta) and Tiemo Wölken (S&D, Germany), and Loukas Fourlas (EPP, Cyprus) as draftsman of the opinion, proposing a series of measures to address the threat posed by Strategic Lawsuits Against Public Participation (SLAPPs) to journalists, NGOs and civil society in Europe.
Candidate articles can be submitted via the platform https://daphnejournalismprize.eu/ until July 31, 2022, at 12.00 midnight (CEST). Entries must have been published/broadcast in print, broadcast or online media based in one of the 27 EU Member States between 1 September 2021 and 31 July 2022.