LCCI, MPs, Municipality on a joint course for Limassol 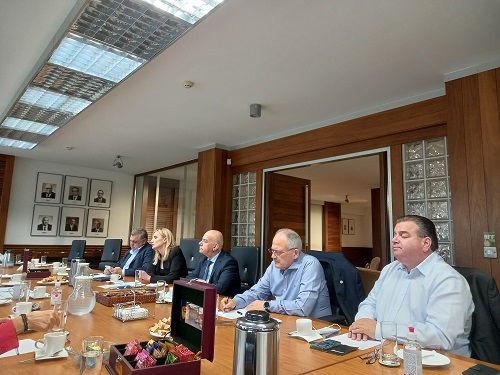 The Limassol Chamber of Commerce and Industry (LCCI), the district MPs of the province and the city Municipality have reiterated their commitment to a joint effort for the optimal promotion of the development and other needs of the city and district of Limassol.
In a meeting held recently at the initiative of the Chamber, the three sides raised and discussed at length issues that not only concern the city and district of Limassol, but also directly affect both current and future development needs. The topics discussed included the proposed new Limassol Archaeological Museum, the Local Plan and the Limassol Center Area Plan, the development needs of the Technological University and the Technological Park in Pentakomo.
The three sides agreed on the need to take concrete initiatives and to coordinate with each other aiming to achieve the best possible results. Attending the latest meeting were MPs Fotini Tsiridou, Nikos Sykas, Costas Costa, Panikos Leonidou and Stavros Papadouris, the Mayor Nicos Nicolaidis, and a team of the Chamber Board consisting of President Andreas Tsouloftas, Vice Presidents Anthi Theocharous, Charalambos Pattihis, Elias Neocleous, Liakos Theodorou and Iros Miltiadous, the Honorary Secretary Kikoula Kotsapas and Board members Miltos Papadopoulos and Pericles Markaris.