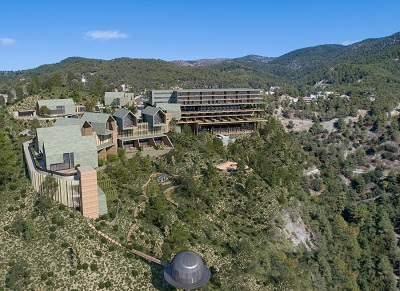 The Guru Mountain Hill Resort in Platres, faces some difficulties, temporary as it is believed. The project concerns a single residential development with a variety of supportive uses and the provision of food and wellness services, as well as recreation areas. The Department of Urban Planning blocked the construction works, until the examination of the Environmental Impact Assessment Study submitted by the company and the securing of all the necessary permits. According to the Water Development Department, part of the development falls within the Nearby Protection Zone of the Kouris water reservoir.
Pending the decision of the Department of Environment, the President of the Troodos Network, Panagiotis Papadopoulos expressed optimism, speaking to "Entrepreneurial Limassol", that the ambitious project will go ahead. The project, as he explained, was blocked due to a retaining wall being constructed on the access road to the main complex. The project, as he explained, has secured three urban planning permits and the one pending is the fourth.
According to the developer of the project, all construction works, which have already begun, are part of the planning and building permits given by the competent authorities. As Panagiotis Papadopoulos explained, the project in no way interferes with the riverbed of the adjacent river. The benefits, he stresses, for the area from its implementation will be great, as new jobs will be created, while a former rubbish dump will be transformed into a tourist resort.  The resort will consist of a central 7-storey building with apartments and suites and independent luxury residences - chalets. It will have a reception lobby, a restaurant, a bottega store, an indoor and outdoor swimming pool, a gym and a wellness center.   Its estimated cost will be €30 million.
The construction of an ecological educational farm - theme park in Prastio Kellakiou is also postponed, following the decision of the Department of Environment to request an additional study for its approval.  The construction company, Decosta Labs argues that the project is not expected to cause negative effects on the environment and that on the contrary, it is a green project, one of the greenest in Cyprus, which will contribute to the circular economy. It will also contribute to agrotourism and the promotion of agricultural products.
The area to be occupied by the building and related infrastructure is about 6% of the total area of the plots.  The aim of the project is to educate and educate visitors along with entertainment them, through the promotion of environmental, ecological and cultural issues. The project will include a winery, a distillery, a cheese factory, an olive press, a cafeteria, a restaurant, an amphitheater and an organic store.