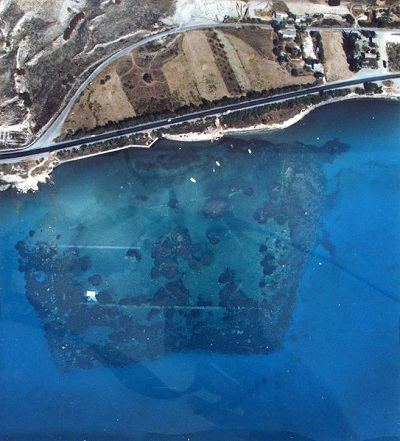 One of the best preserved ports of the Eastern Mediterranean and the only one preserved in Cyprus without alterations, it is revealed and introduced to the general public. It is the sunken ancient port of Amathus, which in a few months will host the first underwater archaeological park in Cyprus.
The project, which is being implemented within the framework of the European cross-border program ANDIKAT, in which the Limassol Tourism Development and Promotion Company also participates, began last May and recently, as stated in "Entrepreneurial Limassol" by Yiannis Violaris, archaeological officer of the Department of Antiquities, the underwater cleaning and digital mapping works of the ancient port were completed with the use of a drone.
At this stage of the development of this unique underwater ancient monument, the installation of information signs is in progress, both on land and underwater, which will guide the visitor to the site. In addition, an application for mobile phones is being developed and an informative leaflet will be issued, which will be supplied to visitors from the entrance of the archaeological site.
As Mr. Violaris explained, the interventions are mild with the aim of revealing and maintaining the surviving parts. Visitors will be able to approach the ancient monument with a mask without having to dive, as the depth is small, from 50 cm to 2.50 meters.
The creation of the underwater archaeological park also aims to attract diving tourism, which is very popular abroad. The project, which is co-funded by the European Union and national funds, will be completed in 2022 and is implemented by the Underwater Archaeological Research Laboratory of the University of Cyprus, the Department of Antiquities and the Department of Fisheries and Marine Research.