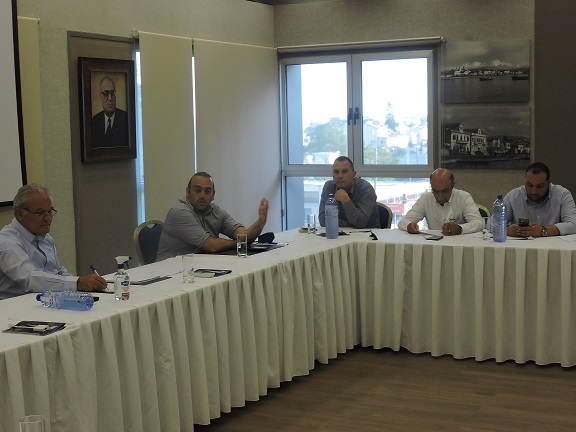 A wide range of issues of interest to the Limassol business community and pertinent to the Ministry of Transport, Communications and Works, were discussed in a recent Board meeting of the Limassol Chamber of Commerce & Industry attended by the Minister Yiannis Karousos.

Welcoming Mr. Karousos, Chamber President Andreas Tsouloftas, brought before him a number of issues related to the development and other needs of Limassol, city and district. Issues related to the port of Limassol and the port industry of the country in general were also raised, with emphasis on problems faced by traders-members of the Chamber due to significantly increased charges.

The Minister, addressing the issues raised before him, referred to several road projects that are under implementation or planning in the city and district of Limassol. Regarding the port charges, he noted that a study is being prepared by a specialized firm, while opinions are expected from the State Legal Service. He also referred to the upgrading of public transport, on which the implementation of the Limassol Sustainable Urban Mobility Plan depends. In relation to the upgrade of the Limassol Archaeological Museum, Mr. Karousos was clear that what is needed is not any upgrade of the existing one, but the creation of a new, modern museum.

PASYXE Limassol - 95% of the hotels resist to padlock

Limassol Marina: The flagship project has been completed

The first Limassol hotel which was turned into a hospital, a poorhouse, a cable-car and eventually a parking lot!

Water Board of Lemesos: Smart water meters are coming

PHOTOS + VIDEO: A village in Limassol, you never tire of exploring

Neophytos Charalambides: "There is still a lot to be done until December" - The bets that the new Deputy Mayor is called to win, until the end of the term of the current municipal council