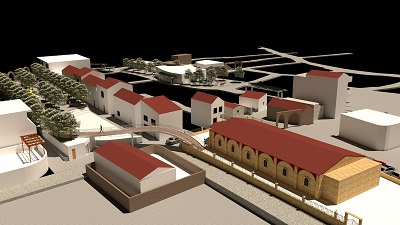 Three major reconstructions are changing the face of Limassol, giving a new impetus for development to previously degraded areas. The construction work began in Agios Spyridonas and Omonia, where the redesign of 54 roads with a total length of 12.5 km, in the context of the creation of environmental neighborhoods. The projects include bicycle lanes, gathering places, urban equipment and road parking spaces. The two projects have a fifteen-month completion timeline and a total budget of €5 million. The third Environmental Neighborhood in Agios Nikolas will be announced before the end of the year.
Within the days, the offer for the redevelopment of the historic core of Agia Fyla, the multi-expected project that was freezed for many years, is also awarded. The construction works, as stated in "Entrepreneurial Limassol" by the Mayor Nicos Nikolaides, will begin before the end of the year. The budget of the urban project that will turn the area into a pole of activities amounts to € 3 million. A new image from November for the historical core of Ypsonas, focusing on the central square of the Municipality that is being constructed in the place of the existing parking area and will carry the name of the late Marios Tokas.
The project includes the creation of a municipal amphitheater of 200 seats and a playground, while visitors will be served by two parking spaces created around the perimeter. In 2023, the conversion of two traditional buildings in the area into the Marios Tokas Museum, the first, and the second to a Municipal Cultural Center, will begin. As the Mayor Pantelis Georgiou stated in "Entrepreneurial Limassol”, the redevelopment and the incentives that will be given to new businesses will dramatically increase the commerciality of the area.
After years of waiting, there are good news for the connecting road of Anthoupoli. Speaking at the "Entrepreneurial Limassol", the Mayor of Kato Polemidion, Nikos Anastasiou, said that the tenders for the project are expected to be announced next April. The project, with a total cost of €1 million, is included in the three-year Financial Framework 2019-2021. A few days ago, the construction of a roundabout began at the junction of Nikaia Avenue with the 8th road leading to the area of Agios Silas, a project that is being carried out especially for road safety reasons.
Part of the northern bypass, which will extend from the 3rd Industrial Area of Limassol (Agios Silas) to Polemidia, is also beginning to take shape, providing access to the new Limassol Technical School to be built in Agios Silas. The tenders for the preparation of the construction plans were recently announced and as explained by the Mayor of Ypsonas due to the large units that will be installed in the Industrial area, the project is considered to be of primary importance. The other major road project of the municipality, that of Elias Kannaourou, is postponed to 2024.
A project that Agios Athanasios had been waiting for years now, is the reconstruction of Sfalagiotissis Street, that began to be implemented. As the mayor Marinos Kyriacou informed us, at the end of November the tenders for the second and main phase of the project will be announced.

CUT - Foreign Minister event: The Dialogue on the Future of Europe and the Role of Youth

CUT Signed a Memorandum of Cooperation with the Ionian University

CUT honored retired academics for their contribution to the University