Parekklisia - A community with unlimited possibilities 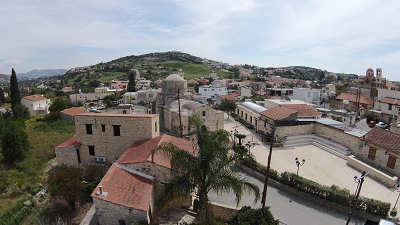 The rapid development of Parekklisia, makes it necessary to implement a series of infrastructure projects, which are delayed due to bureaucratic procedures, said the President of the Community Council, Socrates Pavlou. Speaking to "Entrepreneurial Limassol". Mr. Pavlou said the exception was the construction of the community's sewerage network, which after years of planning and postponements has finally began three months ago.

However, will witness some significant movement as the Interior Ministry is planning to start work on the widening and reconstruction of the connecting road of Parekklisia with the Nicosia-Limassol motorway, a project with a total cost of €8.3 million. This is a mature project of primary importance, with ready studies and plans, said Mr. Pavlou, the implementation of which has been pending for 30 years, highlighting the serious road safety problems observed in the community as a result of the movement of heavy vehicles moving to and from the three quarries operating in the area. This urban planning project will include the extension of the motorway exit lane from Limassol to Parekklisia by 250 meters.

Community priorities include the construction of a multi-functional centre next to the offices of the Community Council and an amphitheatre next to the Community Stadium to host community events. For these two mature projects - as the plans are already in place - efforts are being made through the District Administration to integrate them into a European funding programme. A long-standing request is the preparation of the masterplan for the redevelopment of the central square and the traditional core of the community.

Socrates Pavlou said there were unjustified delays regarding the creation of a regional high school in the Parekklisia, which would serve all 20 communities of the eastern region of Limassol. "Although a decision has been taken since 2010 that the high school will be erected on a specific state-owned piece of land," he said, "the procedures are still pending at the Ministry of Education." The modification of the urban areas and their extension around the community is another steadfast request of the Community Council, as Socrates Pavlou noted, adding that this pending issue impedes the further development of Parekklisia.

An ancient church in the mountains of Limassol, a true historical treasure!

The Limassol village that was buried beneath the mud and rebuilt from scratch!

Agios Athanasios - construction of the multifunctional centre under way