Pissouri, the emerald of western Limassol: series of projects in a rising tourist resort 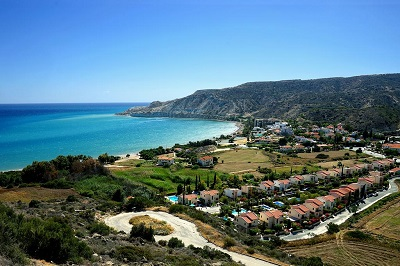 Pissouri is a blessed place, with many beauties, where mountain and sea alternate harmoniously and the picturesqueness of its traditional core enchants even the most demanding visitor. The rise of the village as an alternative tourist destination of high standards is one of the main targets of the community council. In this context, as stated to "Entrepreneurial Limassol" by the President of the community council, Lazaros Lazarou, a tender will be announced shortly for assigning to a consultant the master plan of the Pissouri beach. The creation of a pathway for pedestrians in Pissouri Bay is also under planning, which will provide a way out of the problem of beach erosion. The coastal front has recently been upgraded with modern lights and equipped with outdoor fitness equipment.
In the final stage is the planning for the extension of the cobblestone surface in the community centre, the landscaping of the entrance of Pissouri, as well as the creation of cycling routes and nature trails (the state declared the village Green Capital of Cyprus in 2019).  The biggest problem we face as a community, Lazaros Lazarou stressed, is ground instability in the Limnes area. To deal with this, a study assigned to a foreign company was completed at the end of January and the preparation of the terms of the tenders will begin immediately, with a view to starting the €33 million project, that will include various ground support works, by May.
In recent years, as indicated by the Council President of the Council, important steps have been taken for the development of Pissouri. The old police station has been transformed into a multi-purpose centre, hosting, among others, a cafeteria and two small meeting rooms, while a Hallumi Museum is under construction. The new regional police station will also start operating in the restored old primary school of the community and planning for the creation of a fire station will begin shortly. For a few months now, Lazarou said, the new offices of the Community Council have been operating from the renovated building of the former coop bank. In the design stage is also the conversion of the old offices of the community council in the main square, into a library and a multi-purpose hall.