Resilient construction sector, despite some re-thinking 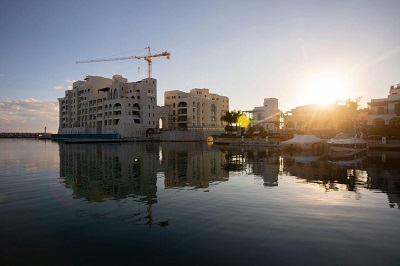 Modification of plans for projects under construction and partial freezing of new investments seems to be part of the legacy of the pandemic and the abolition of the investment programme. However, despite the shocks that will likely be even more noticeable in 2021, the construction sector seems to be holding out, adapting its plans to the new conditions and turning its attention to areas where demand is still strong, such as the rental of office spaces.
Speaking to "Entrepreneurial Limassol", Cybarco Group CEO Michalis Hatzipanagiotou stated that Cybarco continues unabated with the implementation of all projects in progress. "Group policy," he explained, "is before we start a project to have construction costs secured, either by banks or investors...This more conservative way of acting allows us to carry on." He believes that all projects currently under construction in Limassol, large or small, will be completed.
For Trilogy, Mr. Hatzipanagiotou said that the two towers constructed on the beach road, the public square and the shops will be completed by mid-2022, with sales already at over 60%. "At the moment," he pointed out, "we are in the middle of the first phase of the project, with the first two towers already on the 18th floor", while as far as the third tower is concerned, there may be changes in the design, with, for example, a reduction in its height.
Housings projects surrounding the Limassol marina will be completed in two months, with the delivery of the Castle complex. The separation of 501 plots for residential development at Limassol Greens Golf Resort in Fasouri is now a fact, while the presale of a limited number of plots has begun. Work of the golf course will begin In the second half of 2021, with actual construction getting under way in early 2022. All facilities are due for completion by 2023. There is also change of plans for Neo, of the Pafilia Group, which is also under construction on the Limassol coastal road. Two of the project’s four towers will be erected according to the existing plans, while for the other two there will be adjustments to the new situation, according to the group's president Elias Eliades. Meanwhile, the group's biggest project, One, will be completed in May.