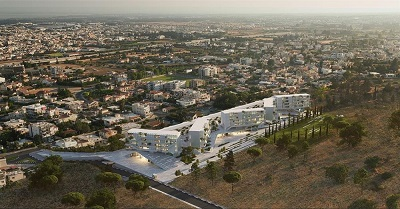 New projects will soon get under way in Kato Polemidia municipality, according to Mayor Nicos Anastasiou. Interviewed by ‘’Entrepreneurial Limassol’’, the Mayor said work on removal of the last debris and asbestos from the former Berengaria settlement  is expected to resume within days, as a financial dispute with the contractor has been solved, with completion due in two months’ time. An important meeting is due to take place on September 28 between the Mayor and the Minister of the Interior in Nicosia, where the master plan for the utilization of this large area will be presented. The Cyprus University of Technology has already assigned the project for the architectural design of proposed student dormitories in Berengaria, to be set up in the former British settlement, make part of projects that will be funded by the EU. The construction of the new Town Hall in the same area will also be discussed, as well as the construction of the new Limassol Olympic swimming pool, a project that was put on hold in the wake of the COVID-19 pandemic and its impact on state finances.
Important developments are also expected in the coming months with regard to road works in the municipality. By the end of the year, the construction of a traffic island and temporary parking spaces on Theodorou Potamianou Street is expected to begin, within the framework of the licenses for the commercial premises in building complex of the former Orphanides supermarket, as well as the landscaping of the vertical road, in the wake of the agreement reached between the municipality and government departments, for the maintenance of green areas.
The coming year 2021 will also mark the beginning an additional two important projects, the construction of the connecting road of Anthoupolis with Nikaia Avenue (plans for this have been completed and a relevant budget has been allocated) and improvement works on Synergatismoe Street. The project includes the creation of a roundabout at the junction with Grigori Afxentiou Street, a traffic island and road humps to reduce speed, on a road where there have been many traffic accidents in the recent past. The mayor said, moreover, that within a year, at the latest, the existing livestock zone in the municipality will be relocated near Vati and 2021 will also be the year of flood protection works, as next March, construction works of rain gutters will get under way at Panagiotis Anagnostopoulos, Eugenios Voulgareos and Melina Mercouri streets.