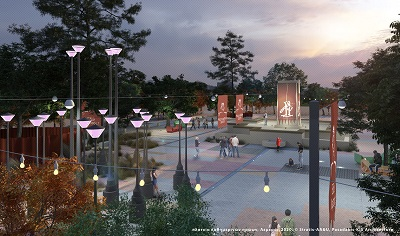 The Heroes Square and the Municipal Garden, two of Limassol’s landmarks, will have a new face in the coming years, while, at the same time, maintaining their identity.  After the reopening of the Rialto Theater and the arrival of Cyprus University of Technology and the Modern Dance House, Heroes Square has been revived and transformed again into the cultural and social core of the city. Bars, restaurants, coffee shops and galleries are now open; however the Square needs more restoration to become even more attractive and functional. For this purpose, the Limassol Municipality is implementing the Action Plan for the regeneration of the Square and its surroundings, a project that will cost €3 million and is expected to begin next year. The architectural competition was won by Socrates Stratis - AA&U for Architecture and Christos Pasadakis - KIS architecture.
The award-winning study enriches the Square's landmarks, the Heroes' Monument and the Rialto entrance. A floor will be created without height differences that will allow public events to be held and hanging lighting will be placed, to leave the floor unhindered. The kiosks on the four corners of the Square will accommodate structures for collective management of the Square. The suggested structure provides for a "Small Rialto", "Ideas Greenhouse for All" and "Playground".
An optimum dining area is created in front of the cafes and restaurants, with the pedestrianization of two of the four streets around the Square. This way the main area of ​​the Square remains accessible to the public. The existing lighting with their columns is transferred to the west side of the Square and are organized in an elliptical shape. Also foreseen is the connection of the Square through a network of sidewalks with Anexartisias, Agiou Andreou, Gladstonos streets as well as with the area of ​​the Municipal Library. Finally, traffic management measures are defined to ensure the safe movement of pedestrians and cyclists.
Master plan for the Municipal Garden
The masterplan for the large-scale upgrade of the Municipal Garden is ready, which will be done on the basis of a landscape study carried out by a team of experts and concerns all the spaces and infrastructures of the garden. As the Mayor, Nicos Nicolaides explained, this is an ambitious plan that will be implemented gradually, by each subsequent Municipal Council. The experts propose the creation of a botanical garden, around the building of the Pattiheio Municipal Museum, in combination with open spaces with grass for events. Nearby, the botanical museum and a glass greenhouse with tropical plants will be built.
In the northwest corner of the garden, an exhibition space with large windows will be built, with photos of flowers and butterflies. The existing water stream will become a linear shallow pond with goldfish. Along it will be placed benches, while in the existing lake there will host aquatic plants, such as water lilies, with swans, ducks and goldfish, while the small islands will be joined by wooden bridges.