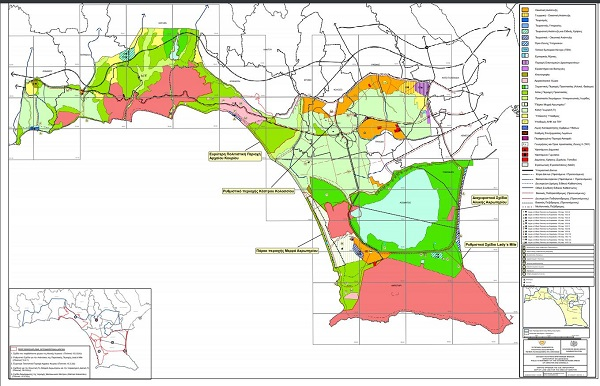 The first tangible results of the agreement between the Cyprus Republic and the United Kingdom to exploit 78% of the territory inside the British sovereign bases in Cyprus will become visible within the first quarter of 2021. July 12 will mark the completion of the examination of objections on the draft Policy Statement and the Strategic Environmental Impact Study, which will be forwarded along with the opinion of the Environment Department to the Sovereign Bases Areas Administration, while the process is expected to be completed in six to eight months.
With the implementation of the agreement, 860 hectares of land in Akrotiri Bases are released into urban zones. Restrictions are lifted and the Town Planning rules applicable in the rest of the Republic will apply in relation to the acquisition and development of property. The President of the Republic stressed that it was a historic day for the residents within the Bases, adding that implementation, after six years from the signing of the agreement in 2014, opens up important prospects for economic growth.
The agreement paves the way for the redevelopment of the Lady's Mile with the creation of a road of mild traffic and public parking spaces and also for the implementation of plans for upgrading the areas of ancient Kourio and the Kolossi castle. Planning for Kourio provides for the integration and promotion of the ancient monuments of the area, as well as the development of infrastructure works facilitating the movement of pedestrians and also the creation of parking spaces. The plan for the development of the area around the Kolossi Castle includes the creation of parking spaces and a large square to the south of the castle, as well as the interconnection of the area with the core of the community.
The general Management Plan for the Akrotiri salt lake, provides for the promotion of the area, as well as for developments aimed at the support of ecosystems. The plan for the Merras area of Akrotiri and the adjacent forest, which includes the fishing shelter and turtle beach, aims to provide opportunities for nature study and for sport visitors. In Lady's Mile and Agios Ermogenis, leisure and entertainment developments will be allowed.  In Paramali and Avdimou, as well as in the areas west and east of Akrotiri, small tourist developments will be allowed, while two small craft industrial zones are created in Trachoni and Akrotiri. The bypass road, which will connect the 1st Industrial Area of Limassol with the old road Limassol - Paphos, via Trachoni, will be constructed.
The historic agreement is to the area residents’ satisfation. The Municipality of Ipsonas was particularly favoured, Mayor Pantelis Georgiou told "Entrepreneurial Limassol". An area of 3.2 square kilometers will be integrated into residential and commercial development zones, benefiting more than 1,000 owners. Area C3-H3 (southeast of the Papantoniou supermarket), remains agricultural that could be activated in residential only if all unlicensed industrial facilities are removed. In the BE1 Economic Activities Zone, high-tech companies, car or mechanical equipment dealerships, etc. will be allowed. Interest for commercial developments in the Municipality is intense. Therefore, the Mayor stated, we expect very serious developments in the next two or three years. Finally, he expects that there would be no significant variations in the project after the objections had been examined. Finally, the President of the Akrotiri Community Council, Giorgos Stylianou, expressed satisfaction too, saying this will be the first-time foreign investors have access to the Akrotiri area.