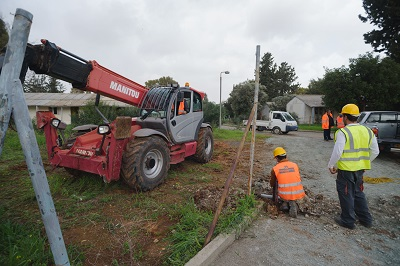 The discovery of asbestos fibres in the concrete of the demolished former British military estate of Berengaria in Polemidia, is putting off plans for the development of the area. The cessation of work, as Polemidia Mayor Nikos Anastasiou complains, has left the area once again, at the mercy of time and rodents. The issue is now a specialized technical committee, which will consider the contractor's request for the concrete to be removed, instead of being processed and buried on the site, as provided for in the contract. The same position is shared by the Parliamentary Committee on Agriculture, which took up the delay in the delivery of the project, as well as the Department of Public Works.
The contractor set a three-month deadline for completion of the work, but final decisions will be made this month. It is recalled that the project of dismantling and removing of hazardous asbestos, started on January 22, 2018 and according to the initial plans, should have been completed in early 2019. However, the coronavirus health crisis seems to have overturned plans to build the new Limassol Olympic swimming pool in Berengaria, a project which is now put on hold based on the decision of the Ministry of Finance. A feasibility study had been carried out on this specific project, based on which the cost would reach €3.9 million, while the Cyprus Sports Organisation would contribute more than €1 million.
On the contrary, procedures for the construction of the university campus of the Cyprus University of Technology (CUT), the green are and the Polemidia town hall in the same area, seem to be proceeding normally. According to the plan for the area of ​​260 thousand sq.m., Berengaria will host student dormitories with a capacity of 450 beds, sports facilities, laboratories and a research center for CUT. The Polemidia Municipality promotes the construction of its new Municipal Hall and a park of 40 thousand sq.m., while ​​100 thousand sq.m. are said to be put aside the creation of a technology park.

The Ambassador of the Czech Republic visit CUT

Connection of society and industry strategic goal for CUT