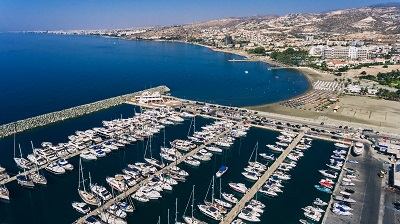 A small number of Limassol hotels opened after the June 1 easing of the coronavirus-related restrictive measures. Despite the imminent (at the time of writing) re-opening of airports for flights and the Holy Spirit long weekend, no substantial change was expected. Of course, the facts change daily, the Chairman of the Limassol District Committee of the Cyprus Hotel Association (CHA), Haris Theocharous, told "Entrepreneurial Limassol". Stating the hoteliers’ in principle wish to reopen, he pointed out that what needed to be considered was the viability of a hotel if all hotels in Limassol open. "We know that 2020 will be very damaging, but the challenge is for this damage to be contained so that it does not compromise the future viability of a hotel unit," added Haris Theocharous.
Referring to the unresolved issues of the Limassol hotel industry, he prioritised liquidity, labour matters and flights to Cyprus, as the most important issues. Regarding flights to Cyprus, the news regarding, Hungarian Wizz Air, the largest low-cost airline in Central and Eastern Europe, that it will start flights to and from Larnaca airport from July 1 gave some relief to the tourism industry. Transport Minister Giannis Karousos estimates that about 600.000 passengers will arrive in Cyprus in August. Opening up to the large and largely new German market is a challenge for the industry, as Cyprus falls significantly short on arrivals of German tourists compared to neighbouring competing destinations. For example, every summer 800.000 Germans visit Crete, whilst only 150.000 visit Cyprus, compared to 1,4 million Britons and 800.000.  Consultations between the relevant Ministries, tourist agents and HERMES airports are understood to be under way in order to attract more tourists from Germany.
At the same time, domestic tourism is considered vital for the tourism industry. To attract locals, CHA issued a list of more than 120 hotels (12 in Limassol) with offers and attractive prices from 25 euro per person. The Chairman of the Limassol District Committee of the Cyprus Hotel Association, welcomed the package of measures announced by the government for the economy, saying characteristically that it was a pleasant surprise. Mr. Theocharous stated his satisfaction regarding the safety and health protocols regulating the operation of hotels, noting that they are balanced and allow customers to feel that they are in a hotel and not in a hospital. In conclusion, Haris Theocharous sent the message that "in CHA we work very hard, with seriousness and responsibility towards our employees, associates and our country".