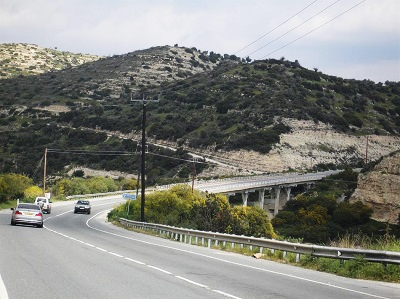 The contracts for the two major road projects in Limassol are expected to be signed in June. These are the first section of the Limassol-Saittas road (already signed) and the Germasogeia bypass road. The President of the Republic’s latest address in support of the economy minimised concerns about cutting development projects due to the new economic crisis caused by the COVID-19 pandemic, while both projects managed to overcome the obstacles from appeals to the Review Authority.
Regarding the Saittas road, the appeal before the Review Authority was rejected on May 11, while in the case of the Germasogeia bypass road, the plaintiff withdrew its claim, and the relevant funds were released. Phase A1 of the Limassol-Saittas road, which was awarded to Cyfield Construction, at a cost of €26.126.000 refers to the Polemidia-Palodia section. Speaking to ‘’Entrepreneurial Limassol’’, the Limassol District Engineer of the Department of Public Works, Thrasos Afamis, said construction work on the two projects is expected to begin in September.
At the same time, in May the Ministry of Transport announced offers for the installation of traffic lights at the Agia Fyla roundabout, to alleviate the traffic congestion problem in the area that affects thousands of drivers. Based on the study carried out, with the installation of traffic lights at the junction, there will be a reduction of traffic congestion by almost 50%. The Municipality of Limassol is asking for offers for the upgrade of Vassileos Konstantinou Street, while the works for the creation of road islets on Nikos and Despina Pattihi Avenue will begin in June, with Mr. Afamis pointing out that parking spaces on streets will be created where available and possible, and with the consent of the owners, others will be added.
Within days, the reconstruction work will begin on part of the pedestrian walkway of Agios Tychonas, which was destroyed in the winter because of stormy seas. The tender for the construction of the Troodos Observatory in Agridia is also in progress, with the deadline for submitting bids set for June 29. The ambitious €1,2 million project involving both the building and the equipment as well as the landscaping of the surrounding area will begin in the fall. Despite the positive messages sent in the May 27th speech by the President of the Republic, at the Sewerage Board of Limassol–Amathus was said to be still waiting for information about the future of Limassol's anti-flood works, amounting to €28 million. The first phase of the project that was planned to start this year, refers to work in the Ekali-Tsirio areas.